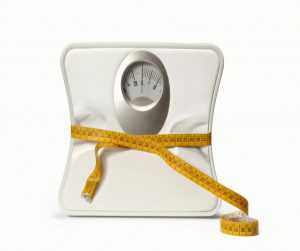 Ceylon Cinnamon is the best choice for a possible weight loss program because it has low Coumarin levels and won’t damage your liver if taken daily. Cassia Cinnamon has high levels of Coumarin (0.4 % – 0.8% – considered high) which will damage your liver. So you might end up skinny and die from liver failure. Cassia Cinnamon is acceptable for occasional consumption but if you are taking Cinnamon on a daily basis for weight loss then Ceylon Cinnamon is the better choice. The best way to loose weight is to reduce your food intake. And Cinnamon might help by reducing the hunger pangs. It does not seem to have any property to burn away your fat cells. But it could possibly prevent the accumulation of fatty cells. Ultimately it is your decision. Try it for three months. It it fails, the cost would be far cheaper than any other other possible remedy with virtually zero side effects. But it is essential to get good quality Ceylon Cinnamon.

We prefer to drink a cup of our Cinnamon Bark Oil infused black tea, without sugar. It’s easy and tastes absolutely fantastic without sugar. After all it is the World’s best cinnamon black tea.

But if you are allergic to caffeine we would boil a cinnamon stick and make a tea out of it and have a cup every day with a meal. If you have no patience with boiling the sticks, boil a few sticks, make a jug of tea and keep the rest in the refrigerator. It will keep well for 3 days or so. It is delicious iced.

If the sticks are not convenient then we would suggest adding a cup of boiling water to a 3/4 tsp of Ceylon Cinnamon powder, brewing it for three minutes and then straining it through a fine filter. A bit messy but still quicker that boiling cinnamon sticks. We have used a French press and poured it carefully so the powder will not get into the cup too much. Our powder makes a pretty potent cup of cinnamon powder tea we have to say. And if you are traveling, the powder is easy to take with you.

The next choices are adding Cinnamon to your cooking (sticks), adding it into a smoothie (powder), sprinkling on fruit (powder) and the myriad other ways we list in recipes on our site. This you do when it gets boring to take cinnamon the easy way. Need to keep it interesting. Otherwise you will get sick of it. 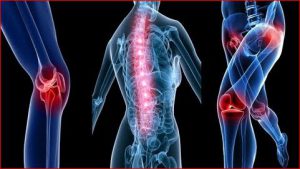 Cinnamon has high levels of Manganese (73% DV in 8g – 2 cinnamon sticks), which is the magic ingredient responsible for the formation of bones and connective tissues. One of the best known studies of Ceylon Cinnamon and its effectiveness against osteoporosis was this comprehensive Japanese study. The study concludes that a key component of Ceylon Cinnamon that makes it so effective against osteoporosis was the Cinnamaldehyde in Cinnamon Bark. Perhaps a cup of our Cinnamon Tea made with real Cinnamon Bark Oil high in Cinnamldehyde is the solution.
This Naval Special Warfare Group study demonstrated that a combination of glucosamine HCl (1,500 mg/day), chondroitin sulfate (1,200 mg/day), and manganese ascorbate (228 mg/day) relieved symptoms of knee osteoarthritis. Cinnamon has good levels of manganese which means one could logocally conclude that it could certainly help of arthritis symptoms.

This Duke University study discovered that Manganese was effective against mouse spinal cord compression injury, although efficacy was dependent on route of administration. This South Korean this study recognized the possibility of Cinnamon bark as a remedy for inflammatory disorders.
A Japanese study of 1994 found that manganese superoxide significantly reduced foot swelling but also retarded radiological bone destruction in adjuvant arthritis. This 2013 study of Iranian athletes with Cinnamon and ginger found a decrease in muscle soreness. Admittedly muscles are not bones but is certainly within the realm of possibility that it could help bones too. Cinnamon and Honey– The widely cited Copenhagen study is a complete hoax. All indications are that honey and sugar will make your arthritis worse. According to this Livestrong article and many others we found, honey is not effective against arthritis in anyway. But Cinnamon is good option for arthrities. 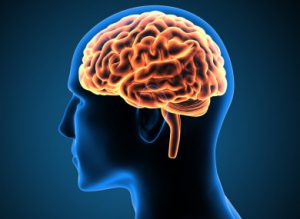 A cinnamon solution for your brain. The key here is preventing cognitive difficulties from happening in the first place. There is an old Chinese saying “The superior doctor prevents sickness; The mediocre doctor attends to impending sickness; The inferior doctor treats actual sickness “. So if you are a student, instead of gulping down high sugar drinks to keep you awake, try some of fabulous Ceylon Cinnamon tea infused with Cinnamon Bark Oil. If you don’t want any caffeine (tea has a 1/4 of caffeine in coffee) boil some Ceylon Cinnamon sticks to make a fabulous tea. It could conceivably prevent your brain from shrinking,

If you are an athlete Cinnamon may help you react faster. If you are at beginning stages of things like Alzheimer’s, it could counteract some of the damage allowing you to live a more productive life. And if you are leading the life of a fast paced executive, Cinnamon could be the key to better work performance without resorting to highly caffeinated sugary drinks or worse drugs. But we must stress not to overdo it. Never exceed the daily limit of 6g Cinnamon per day for six weeks with a period of rest after that as recommended by the US department of Health. Starting a Cinnamon habits at a young age and cutting out sugar could be the key to leading a productive and happy life free of debilitating illnesses, especially of the brain. Because to lose your brain is not to live at all.

The latest finding indicate that two compounds found in cinnamon — cinnamaldehyde and epicatechin — may be effective in fighting Alzheimer’s. According to a study by Roshni George and Donald Graves in 2013, two scientists at UC Santa Barbara, Cinnamon has been shown to prevent the development of the filamentous “tangles” found in the brain cells that characterize Alzheimer’s.The use of cinnamaldehyde, the compound responsible for the bright, sweet smell of cinnamon, has proven effective in preventing the tau knots. By protecting tau from oxidative stress, the compound, an oil (major component of Cinnamon Bark Oil), could inhibit the protein’s aggregation. To do this, cinnamaldehyde binds to two residues of an amino acid called cysteine on the tau protein. The cysteine residues are vulnerable to modifications, a factor that contributes to the development of Alzheimer’s. 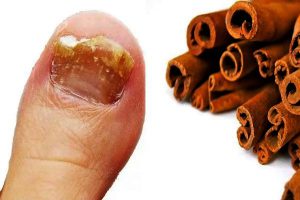 An effective toenail fungus treatment also requires internal treatment. And for that Cinnamon consumed internally is one of the most effective treatment options because it has been proven effective against antibiotic resistant Candida. Cinnamon also removes all the bad gut bacteria in your stomach. Bad gut microbes compromises your immune system, another cause of the toenail fungus.

Ceylon Cinnamon Stick Tea – This is very easy to make. Take One 3 inch Ceylon Cinnamon Stick, add 1.5 cups of water and slow boil over 25 minutes. Then let it cool down for 15 minutes. When it becomes a beautiful red color you know it is ready. You can make a whole jug and keep in the refrigerator, but heat it again when you drink it.
Ceylon Cinnamon Power – Although not as powerful as the sticks, you can still use Cinnamon Powder to make some cinnamon tea. Simply add 3/4 teaspoon of powder to 1.5 cups of water, let it steep for 5 minutes, strain the powder residue that usually sinks to the bottom and drink. Not bad even if it is a little messy to make.

Ceylon Cinnamon Bark Oil – This is the easiest and most powerful way to take Cinnamon internally. Research shows that it the oil component of Ceylon Cinnamon that is so good for killing all manner of fungus and bacteria. This is the nuclear option and very powerful. Add 1-2 drops to 8 oz. of hot water or to your herbal tea. Be extremely careful as too much will drop your blood sugar levels not to mention being sweet spicy burning hot. Start with one drop at first.

Of course make sure it is Ceylon Cinnamon and not the Cassia Cinnamon which has too much Coumarin and will damage your liver. Besides Cassia Cinnamon Oil is generally not considered good quality and has a different chemical signature. 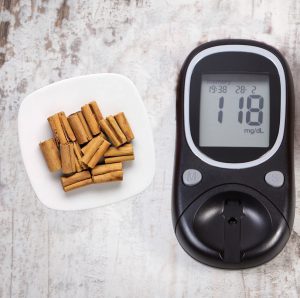 Without a doubt many of the studies on Cinnamon for diabetes were poorly done resulting in mixed results. What we have found is not much attention was paid to the quality of Cinnamon used in the studies with no description of the Cinnamon quality levels as measured by essential oil content, chemical signature, compounds present or ash content. Sometimes we think the drug companies have funded Cinnamon studies designed to fail, to keep you hooked on commercial drugs. We are strongly of the belief, the higher the quality, the better results are. For example a high Ceylon Cinnamon Bark Oil should have at least 60% Cinnamaldehyde. Low quality Ceylon Cinnamon powder or sticks (yes even Organic) can have little or no real Cinnamon in it resulting in mixed results. Try to buy good quality Ceylon Cinnamon.

We think you can use Cinnamon to initially address the blood sugar issues to get it under control fast, but you must follow it up a with consistent healthy diet and moderate exercise which more than anything else reduces insulin resistance. And a little bit of Cinnamon as you would use salt and pepper. Don’t use Cinnamon as a substitute for getting healthy.