is the Better Choice

is the Better Choice 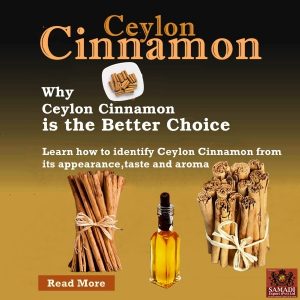 The Ceylon cinnamon is the best cinnamon you can find on the market. However, you can only find it in specialized shops. This spice is very good if you cough a lot, if you have any problems with your digestion, if you are tired or if you show too much apathy. This spice was used in ancient Egypt for embalming. A cinnamon stick which is boiled in water produces steams which are very effective when it comes to your sinuses and when you cough. You can find cinnamon powder on the market or you can find pieces of cinnamon and rolls, too. It is used for aromatizing sweets, pies, ice creams, boiled wine and liquors. It is also used for the different products made of bread, for puddings, tea, punch and some kinds of fish and meat.

This spice contains large amounts of manganese, iron, calcium and fibres, but it also contains other substances which work as antioxidants in the human body. There are also substances which work as sedatives, which have calming effects and which can be very helpful if you have a high blood pressure. A small daily dose of cinnamon reduces the levels of glucose, cholesterol and triglycerides in your body and it also works for people who have diabetes in stage two. Also, the cinnamon extract reduces the glycaemia of people who suffer from diabetes. This spice is also tonic and antiseptic, contributing to your revitalization and removing the apathy which usually appears when you have a cold or other viral infections. 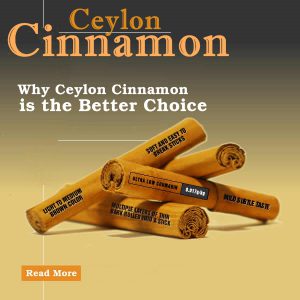 “Eat only the real Ceylon cinnamon”, someone warned me during a conversation about some application of home remedies. That was when I had my epiphany about cinnamon. Before that, it has never struck me how a familiar spice like cinnamon could possibly be “fake”. Much puzzled by that remark, I queried further to get more information and subsequently was rewarded with an enlightenment on this exotic spice through a more intensive search in the world wide web. The following will open your eyes to realise that not all cinnamon are equal and to know exactly what kind of cinnamon you have been eating.

Real Cinnamon
Ceylon cinnamon has been hailed as the “true cinnamon” or the “real cinnamon” that possesses outstanding health benefits especially for the diabetics and those challenged by obesity and high cholesterol issues. Unfortunately this cinnamon which is native to Sri Lanka and sourced from the plant Cinnamomum zeylanicum is rather unknown to most people. In the United States and many parts of Asia, what the majority of us have been buying from the Supermarket and groceries and consuming is actually not the real cinnamon but Cassia cinnamon, which comes from a different plant called Cinnamomum cassia, only known as Chinese cinnamon that are mostly cultivated in China and Indonesia. While the two species of cinnamon share certain characteristics such as antimicrobial, and in terms of inhibiting the growth of fungi and yeast, and regulating blood sugar, their contents differ much in terms of the amount of coumarin, which is a natural substance with strong blood-thinning properties. The coumarin level in Ceylon cinnamon is negligibly small, while that in Cassia cinnamon is an appalling 1200 times higher. The ingestion of large amount of coumarin or consumption of coumarin over a prolonged period of time can cause serious health damages and a negative impact on the liver and kidney. German FDA has warned against consuming the excessive intake of Cassia bark due to its coumarin content.

Ground Cinnamon
Because there is no way to tell if the cinnamon powder has been made from the Ceylon or true cinnamon versus the Cassia cinnamon, and most bottles of cinnamon we buy (including the bottle I currently have in my kitchen) do not indicate the type of cinnamon tree the cinnamon is sourced from. In many countries this Ceylon cinnamon is just not imported in the country. Check directly with the supplier to ascertain its origin of the cinnamon before buying the cinnamon powder. And my review of the two types of cinnamon powder? I paid for half a kilo of Ceylon cinnamon to be shipped to me right after I discovered its existence. When the package arrived, I immediately opened it and took a sniff of the powder. WOW BANG! It was exactly like how others have described it! The aroma was sweet enough to make you fall in love with it immediately. Its pleasant fragrance was a heaven and earth difference from the harsh, pungent Cassia cinnamon I had always known. Never did I ever expect cinnamon could smell so delightful. Immediately I was able to imagine the vast difference in taste it would make for baking pastries and cakes. Before that, I was never able to understand how one could make their own Christmas ornaments with Cinnamon sticks or allow the natural fragrance of cinnamon to fill their home. Now with just one sniff of the Ceylon cinnamon, I could make all those connections straight away. What a lovely discovery!

Cinnamon Sticks
As for the cinnamon sticks, there are several ways of determining whether you are getting the real deal. Study the following pointers and check the cinnamon sticks in your kitchen right away to find what you have been eating all this time.

Ceylon Cinnamon Versus Cassia Cinnamon:
1. A highly valued culinary spice and relatively much more expensive versus a common and cheaper variety of cinnamon.
2. Tan brown in colour versus reddish dark brown.
3. Smooth, soft thin bark that forms multiple layers when rolled up versus hard, rough and uneven thick bark that forms only a few layers when rolled up.
4. Rolled up from one side versus curled inward from two sides.
5. Delicate, sweet with subtle notes of clove versus pungent, full-bodied taste.